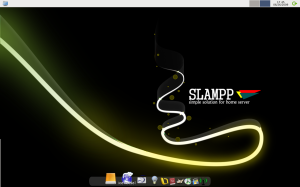 I am almost there! The new SLAMPP will come soon with the following highlights:

That would be all. FYI, this new release will be completely incompatible with the previous releases. Therefore, no upgrade feature will be provided. Having said that, I strongly recommend you to do a fresh install with this upcoming release if you intend to have it run permanently on your PC.

When are you going to release it ? Hopefully I will be able to announce it publicly by the end of this month or within the first week of July. Stay tuned.

I forgot to mention something. Starting from this release, besides the version information, I will give a release a name. The name of SLAMPP 2.0 is Kalinda. I name it after my daughter’s name. 🙂

(a) a Digital Product and Technology executive, experienced in building and managing digital product with co-located and geographically distributed teams

(d) an applied Technologist with a strong sense of business and management acumen as well as equipped with operations, business development, sales, marketing and partnerships experience

Here is what I can do for you, https://kyantonius.com/services/

Do you want to work with me or hire me? You can reach me here.

Managed by Kemas Antonius since 2002.

This is a personal blog, written in English, Indonesian and sometimes also in Dutch/Flemish. All opinions expressed in this blog are the author’s own and do not necessarily represent the official view of my employer or my clients.

Disclaimer: Certain links, including hypertext links, in my blog will take you outside my blog. Links are provided for your convenience and inclusion of any link does not imply endorsement or approval of the linked site, its operator or its content. I am NOT responsible for the content of any website outside of my blog. Comments posted on this blog belong to their respectively poster. I NEVER send the visitors or users of this blog any unsolicited emails or infringe their privacy. Say NO to phishing and spams!